Expand the synergistic effect of S. boulardii from digestive health to immunity 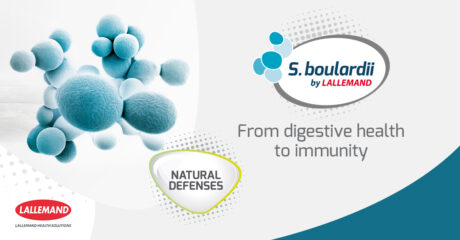 Make the difference and expand the synergistic effect of S. boulardii by combining the probiotic yeast with powerful yeast-based ingredients and documented bacteria strains known to support immunity. Learn more about S. boulardii immunological modes of action and innovative yeast-based based formula in the new leave-behind

The unique probiotic yeast Saccharomyces boulardii, highly recommended for its gut health benefits, also shows a strong impact on the immune system. Supported by several in vitro and in vivo studies(2,3,5), the yeast and its relationship to the immune response has been studied with human clinical trials as well(1,4).

Primarily, S. boulardii has demonstrated its ability to increase immunoglobulin A levels (1,2), to increase red and white blood cells including macrophages, lymphocytes and neutrophils(4), and is also involved in the immune signaling pathways modulation (in vitro and in vivo demonstration)(3,5).

“With 70% of our immune system existing in the gut, the probiotic yeast Saccharomyces boulardii combining both well-known mechanistic functions for the gut (including the barrier integrity and the neutralization of opportunistic bacteria) as well as the stimulation of the immune system, is a real probiotic asset to be added for immune support.” notes Romane Maillet, Product Manager at Lallemand Health Solutions.

A wide range of Lalmin® products, inactivated cell yeast enriched in vitamins and minerals involved in the normal function of the immune system, are available: Lalmin® Vita D with elevated levels of vitamin D, Lalmin® Se a selenium yeast naturally rich in selenomethionine and Lalmin® Zn a zinc enriched yeast. For European countries MOS YE, yeast extract naturally rich in manno-oligosaccharides (35-45% of MOS) and containing mannoproteins is also interesting for its potential benefits on immune activity.

Finally, two probiotic bacteria strains solutions scientifically studied with available health claims can be highlighted in the field of immunity: B. bifidum Rosell®-71 for immune health in stressed students and L. helveticus Lafti® L10 for immune health in active people.