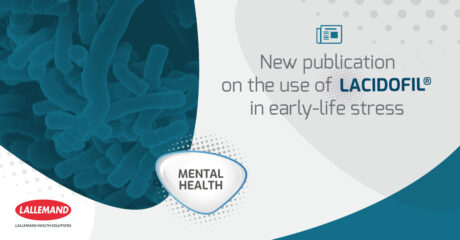 As they co-develop in early childhood, any disruption in the gut or brain may subsequently predispose children to stress-related disorders in adulthood; this was shown in a study by Borre et al. (2014), who described the relationship as a “domino effect” that could induce mental disease and a higher stress response later in life.

In this recently published new study[1] Harmon-Jones et al demonstrates that an early loss of infantile amnesia is associated and directly correlated to a higher level of stress in childhood and behavioral issues later in life. After identifying this anxious phenotype in animals that exhibit better memory of an aversive association learnt during infancy, Harmon-Jones et al, examined whether probiotics would reduce anxiety-like behavior in these animals. In previous animal studies, Lacidofil® was shown to restore a normal offset of infantile amnesia in animals exposed to early life stress due to maternal separation (Callaghan et al., 2016; Cowan et al., 2016; Peng et al., 2019). The same protective effect was observed in this new study on naturally occurring early offset of infantile amnesia when administered in early life, but not when administered in adulthood.

“These experiments are a promising first step and provide a preliminary rationale for the use of specific probiotics to prevent or reduce the negative impact of early offset of infantile amnesia” affirms Lucie Lingrand, Product Manager at Lallemand Health Solutions.

Since 2006, Lacidofil® has been studied for its effects on the microbiome-gut-brain axis and early life stress. Twelve preclinical studies provide evidence that this probiotic supplement may be effective in preventing stress-induced intestinal abnormalities, and they indicate that it has an impact on the brain-gut axis in mammals, preventing from abnormalities in fear-related behavior, decreasing anxiety-like behavior, and restoring normal developmental trajectories in models of early-life stress.