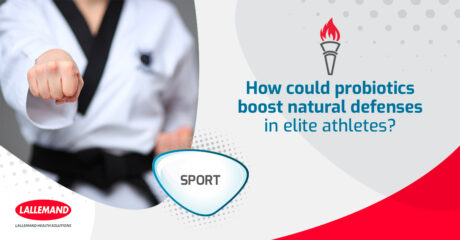 Article 1 of 4. The Tokyo Olympic Games have been officially kicked off and we thought it was a timely opportunity to tell you four recognized ways how probiotics participate to sport performance.

Four reasons to add probiotics to your shake

Probiotic supplements have been recommended by the International Society for Sport Nutrition (ISSN) for their demonstrated modes of action on athletes to optimize their wellbeing [Jäger 2019]. Furthermore, probiotics are not part of the World Anti-Doping Agency (WADA) list.

In a recent published positive position paper, ISSN acknowledge the potential effects of probiotics to:

These four aspects will be covered in a series of articles, where the main scientific evidence proving probiotics have their part to play in sports nutrition will be revisited.

Hyperventilation naturally occurs during exercise, contributing to a higher susceptibility to upper respiratory tract disorders (URT) in sportspeople. Hyperventilation induces mechanical damage to the respiratory tract, resulting in inflammation, asthma-like symptoms, a runny nose, fatigue and, ultimately, fever, representing 30 to 40% of reported URT disorders in athletes. URT Infections (URTIs) are a common cause of missed training or a lost competition and can affect performance. Hence, prevention is key, especially in the winter or when preparing for an important event. As the gut harbors more than 70% of the body’s immune cells, probiotics have become increasingly well recognized for their immune response benefits [Sivamaruthi, 2019]. Both mechanistic and clinical evidence indicate their potential to modulate and restore a normal immune response. A specific probiotic strain, Lactobacillus helveticus LAFTI® L10, is particularly well-documented in athletes. Preclinical and clinical studies showed that LAFTI® L10 can help overtrained athletes to recover an eﬀective immune response lowered by exercise [Clancy, 2006]. In 2016, a new clinical study was conducted on elite athletes during winter to evaluate the clinical and immunomodulatory effects of Lactobacillus helveticus LAFTI® L10, confirming previous findings. The study showed that Lactobacillus helveticus LAFTI® L10 supplementation shortened the duration of URTI-like episodes by 3.4 days and demonstrated an effect on a biomarker in blood which has been correlated with a significant increase in natural defenses: ratio of CD4+/CD8+ cells [Marinkovic 2016].

Probiotics for sportsmen and women come in various convenient dosage forms. This subject will be treated in an upcoming article. Stay tuned!