What health benefits hide in yeast? 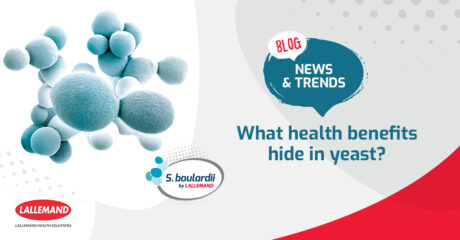 Since thousands of years, yeast is a widely used microorganism. There is evidence that the ancient Egyptians used yeast fermentation to bake bread or make wine. Nowadays, the selected yeast species Saccharomyces cerevisiae, is commonly used in the production of bread, beer, and wine worldwide. But do you know a specific yeast bears some valuable health benefits?

It all starts in the gut

Humans are superorganisms living in symbiosis with trillions of microbes distributed throughout the body. The human body’s largest population of microorganisms resides in the intestine and is called the gut microbiota. Gut microbiota composition is unique to each individual and is influenced by many internal and external factors. A healthy, abundant, and diversified gut microbiota is considered a hallmark of gut health and the number of microbial genes in the gut has been suggested as an indicator of good metabolic and overall health. Thus, targeting the gut microbiota emerges as a potential way of dealing with many health conditions that are on the rise.

Since 2001, probiotics are officially defined as live microorganisms which when administered in adequate amounts confer a health benefit to the host. And specifically, research has linked probiotics to a healthy gut system, which leads to a good digestive and immune health and overall well-being.

Yeast as probiotic: an interesting story

In 1923, in South-East Asia, French microbiologist Henri Boulard was searching for new strains of yeast that could be used in fermenting processes, when he stumbled upon a microbial discovery. During his visit, there was a cholera outbreak, and he noticed that people who drank a mixture made from the peel of lychees and mangosteens, did not develop diarrhea a classic symptom of cholera. Boulard isolated and identified a strain of yeast from the skin of those tropical fruits which was later named after him, ‘Saccharomyces boulardii’ (S. boulardii​) and which became the first and unique probiotic yeast of the history. Belonging to the Saccharomyces cerevisiae family, its specific properties including its tolerance to acid environment and its temperature growth at 37°Celcius, the same temperature as in the human body, make it different from other S. cerevisiae strains and more appropriate to be used as a probiotic.

Relatively soon after its discovery, in 1953, the unique probiotic yeast, S. boulardii was marketed as a drug to prevent acute diarrhea. Since then, S. boulardii has been analyzed in over 100 clinical studies with a focus on its gut health benefits and used in more than 90 countries. S. boulardii is a safe and reliable probiotic, suitable for both children and adults, to support several gastrointestinal conditions such as prevention of antibiotic-associated diarrhea or traveler’s diarrhea and intestinal disorders due to Clostridium difficile and Helicobacter pylori [Hosjak 2018].

S. boulardii, is one type of probiotic, with one major difference: it is not a type of bacteria. It’s a yeast. For the past 30 years or so, it has gained recognition from the medical and scientific community and health care practitioners have recommended S. boulardii to help patients with diarrhea [Guarino 2018] [Szajewska 2014]. Its mechanistic modes of action have been widely documented by strong scientific evidence proving the effectiveness of Saccharomyces boulardii as a beneficial probiotic.