Our clinical trial studying the impact of the two single strains B. longum Rosell®-175 and L. paracasei HA-196 on individuals with certain IBS subtypes has recently been published (Lewis et al., 2020). The study performed in Canada on 251 adults shows positive results on quality of life and frequency of bowel movements. Contact us for more info!

The role of probiotics to support a healthy and balanced gut microflora is well documented. Gastro-intestinal health represents the first area of clinical evidence for probiotics. Research in this area is still going strong and many potential applications are arising. The intestinal microflora plays a central role in our body. Probiotics for gut health have well-defined modes of action, interacting with the intestinal microflora, the gut, the GALT (Gut-Associated Lymphoid Tissue) and the ENS (Enteric Nervous System).

Based on an in-depth knowledge of our probiotic strain properties, Lallemand Health Solutions has developed a selection of dedicated probiotic strains and formulas to address various dimensions of gut health and well-being. These solutions can be formulated into adapted dosage forms such as capsules, sachets, sticks, orodispersible powders and/or tablets: 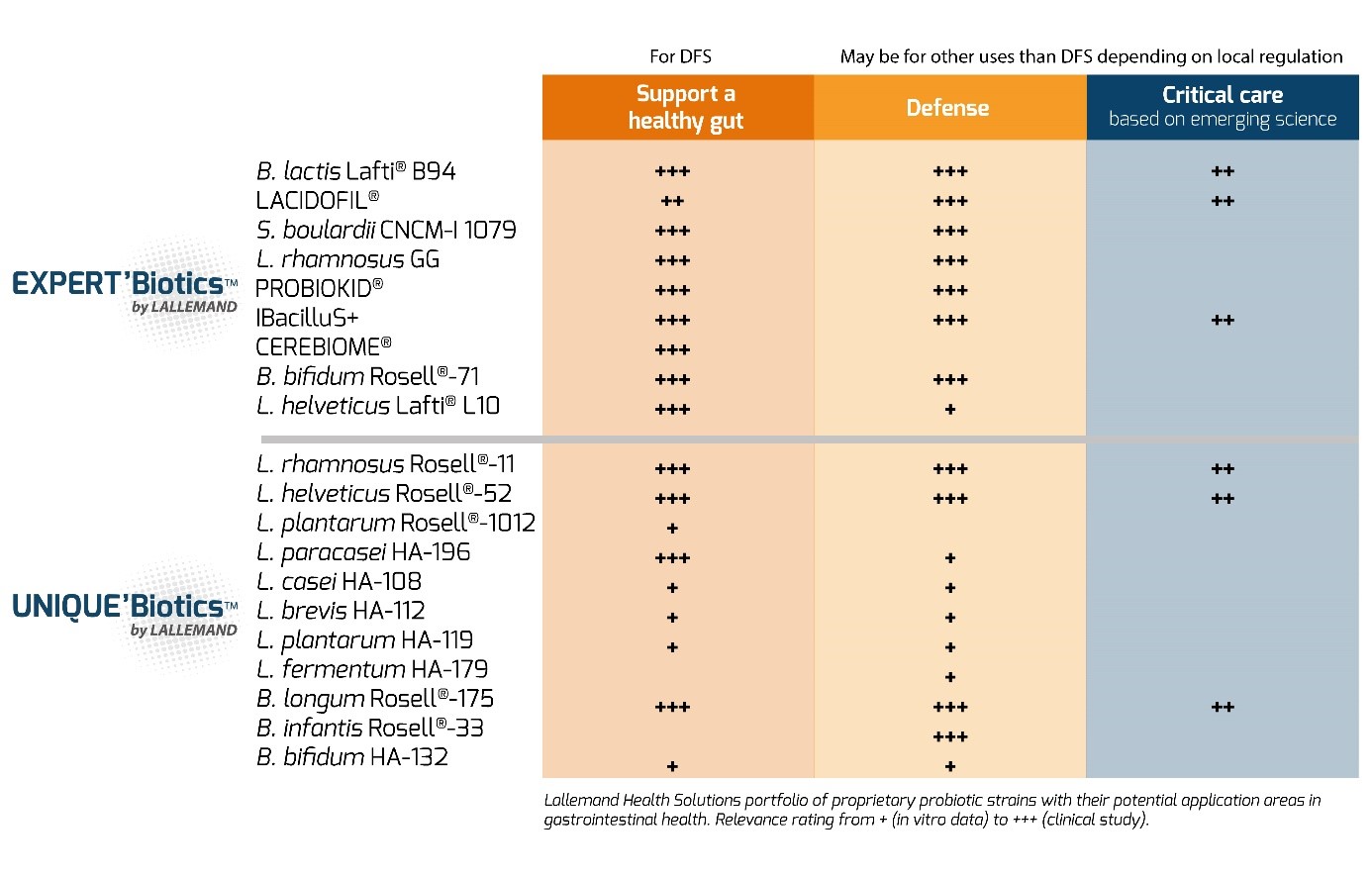 Learn more about our unique probiotic yeast from the Expert’biotics range: S. boulardii by Lallemand. Expert in yeast production since 1923, Lallemand Health Solutions provides the highly documented yeast from natural traditional PURE  ingredients to the most innovative INSIDE  formula in creative finished products. Discover the manufacturing process of our strain Saccharomyces boulardii CNCM I-1079 ensuring the production of an optimized and high-quality yeast.

Several factors brought on by a modern lifestyle can be a source of stress for the microflora. The most common ones being: poor eating habits (i.e. lack of fiber and/or low fluid intake), everyday stress and fatigue, sedentary lifestyle and the use of other supplements (e.g. magnesium). All these factors can disrupt the microflora balance and lead to lifestyle-induced gut discomfort, occasional diarrhea and constipation.

Thanks to its Bio-Support technology, LHS probiotics are well adapted to survive the human gut environment. As shown by many in vitro and in vivo studies, they represent good allies to naturally support a healthy microflora.

In vitro testing is systematically performed on LHS strains to evaluate their ability to adhere to specific gut epithelial cell lines (e.g. HT-29, Caco 2 and FHs74). In particular, L. brevis HA-112 and L. plantarum HA-119 have been specifically selected for their high adhesion capacity. L. helveticus Rosell®-52 and S. boulardii have shown the ability to maintain the gut barrier integrity, for example by strengthening the epithelial cells’ tight junctions.

People suffering from occasional constipation show differences in their intestinal microbiota. It is advocated that, in addition to changes in lifestyle and dietary habits, balancing the bifidobacteria population could be beneficial to normalize transit. Certain specific bifidobacteria probiotics can help support the endogenous bifidobacteria flora. For example, B. lactis LAFTI® B94 has been selected among 40 strains for its good synergy with fiber (e.g. breakdown of fructooligosaccharides and inulin).

The strain B. lactis LAFTI® B94 has been granted health claims in Canada for IBS in kids and teens. Our recent findings in this area also revealed that the two single strains B. longum Rosell®-175 and L. paracasei HA-196 could participate to a good quality of life in population with occasional gut discomfort.   Lacidofil® (L. rhamnosus Rosell®-11 and L. helveticus Rosell®-52), as well as IBacilluS+ (Enterococcus faecium Rosell®-26 and Bacillus subtilis Rosell®-179), have both shown to improve symptom scores.

A healthy, balanced microflora is key to keeping opportunistic microorganisms under control. Factors that affect this equilibrium (i.e. antibiotic intake, travel, dietary changes and stress) can lead to the development of unwanted bacteria in the gut. This is translated into common digestive infections:

Specific strains can protect the gut against other bacteria thanks to targeted antimicrobial properties. They reinforce the gut’s natural barrier effect through competition with other microorganisms for nutrients and adhesion sites. LHS strains have been screened for their action against the main digestive unwanted bacteria in vitro (i.e. various food-borne Escherichia coli, Pseudomonas aeruginosa, Salmonella typhimurium, Listeria monocytogenes, nosocomial Clostridium difficile). For example, L. brevis HA-112 and L. fermentum HA-179 have shown specific antimicrobial activity against E. coli ETEC.

Moreover, LHS has conducted an in-depth research program on probiotics’ interactions with the immune cascades. Certain strains are able to support both innate and acquired intestinal immune defenses. Some specific strains, such as L. rhamnosus Rosell®-11 and B. lactis LAFTI® B94, even have the ability to modulate the immune response (i.e. balance TH1/TH2 response).

Several studies indicate that specific probiotic strains and formulations (i.e. Lacidofil®, Saccharomyces boulardii and L. rhamnosus GG) significantly decrease the duration of occasional acute diarrhea from various etiologies in both children and adults. Clinical studies have also documented the efficacy of B. lactis LAFTI® B94 to reduce diarrhea duration in children with rotavirus gastroenteritis.

The administration of probiotic bacteria and/or S. boulardii yeast is generally recommended in conjunction with antibiotic therapy to prevent associated diarrhea. Several studies have indicated that Lacidofil® significantly reduces AAD in children and adults. Lacidofil® has also shown to decrease the risk of C. difficile-associated diarrhea (CDAD). Interestingly, a clinical study conducted in 160 healthy subjects under antibiotic treatment completed recently resulted in a significant reduction of the duration of diarrhea-like defecation events within 24 hours of probiotic intake. Survival of the probiotic bacteria was also measured during the study. The results confirmed compatibility of Lacidofil® with common antibiotic treatment (e.g. amoxicillin-clavulanic acid). Moreover, the benefits of S. boulardii yeast in AAD prevention have been widely documented in the children and adult populations, as well as supported by at least 20 published clinical studies. Furthermore, S. boulardii reduces the risk of C. difficile associated diarrhea and supports the intestinal microflora after diarrheic episodes.

In the case of H. pylori infections, probiotics such as Lacidofil® and S. boulardii have shown their value, in particular as an adjunct to physician-supervised conventional treatments, improving the eradication rate and reducing side-effects (e.g. diarrhea, nausea).

For other uses than DFS depending on local regulations

Critical gut disorders such as Ulcerative Colitis (UC) or Necrotizing Enterocolitis (NEC) may result from an inappropriate immunologic response to intestinal bacteria and/or a disruption in the balance of the gastrointestinal microbiota in susceptible individuals. Recent evidence suggests that probiotics could help patients suffering from such critical illnesses by normalizing the homeostasis of the gut ecosystem. Such approaches are being considered more and more for patients following intestinal surgery.

Certain well documented probiotic strains and formulations registered as drugs in specific territories have shown promising benefits as an additional tool in the treatment and management of critical gut disorders.

A systematic review and meta-analysis were published in 2013 on the use of IBacilluS+ in UC patients in combination with conventional treatments. It was shown that the probiotic improved the symptom relief rate and decreased the recurrence rate of the disease.

Recent randomized controlled trials have been performed on at-risk infants (i.e. premature, cyanotic congenital heart disease) resulting in a decreased risk of NEC and nosocomial infection following treatment of B. lactis LAFTI® B94 in combination with prebiotic inulin.