Probiotics to protect your precious smile

Did you know that tooth decay is the most common health condition in the world? Oral health conditions affect billions of people worldwide, having a negative impact on their quality of life and their overall health. Just like the gut, the oral cavity harbors a rich and complex microflora: a balanced oral microflora is key to maintain good oral health. Probiotics appear as a relevant solution to address oral health conditions, also answering the needs of nowadays consumers looking for “chemical free” products and natural solutions for their health.

The maintenance of oral health is often addressed by traditional and well-known techniques, such as mechanical action (brushing teeth or flossing) and the use of non-specific antimicrobial products such as mouthwash. However, these antimicrobial products tend to destroy the whole oral flora, leaving space for undesirable bacteria that colonize the oral cavity.

Oral health, such as having proper gum and teeth health, and even fresh breath is closely linked to the oral flora, and probiotics are now well documented for their effects on the maintenance of a healthy oral microflora. As probiotic can have beneficial effects in the gut by maintaining a favorable gut flora, probiotics can help maintain oral health by interacting with its flora.

When looking closely at the oral health issues, it appears that many of the probiotic modes of action also benefit the oral cavity:

Based on its 85+ years of expertise in probiotics selection and development, Lallemand Health Solutions has a portfolio of solutions to address the oral health market.

ORALIS SB, (L. helveticus Rosell®-52, L. rhamnosus Rosell®-11, B. longum Rosell®-175 and S. boulardii) is one of the most clinically documented formula for oral health, also supported by in vitro documentation of its modes of action. It has been granted the following Canadian health claim for children older than seven years old, adolescents and adults: “When used twice daily, helps promote dental health through the control of Streptococcus mutans growth and plaque formation”.

ORALIS SB has been studied in 7 human clinical studies.

In 2011, a first clinical study was conducted on healthy children, where ORALIS SB was demonstrated to decrease the salivary S. mutans count, a cariogenic bacteria, when compared with placebo (Jindal 2011). In addition, a second clinical study was conducted on young adults, where the effect of ORALIS SB was also compared with chlorhexidine and sodium fluoride mouthwashes. In this study, the least S. mutans count was found in the probiotic group, demonstrating ORALIS SB ability to promote dental health through the control of S. mutans growth (Jothika 2015).

Five other studies were also performed on ORALIS SB on the prevention of tooth plaque formation and gingivitis. The reduction of dental plaque accumulation was demonstrated in a first clinical study conducted on children where ORALIS SB was showed to be more efficient than chlorhexidine mouthwash (Thakkar 2013). Purunaik et al., 2014 demonstrated the support of gum health by ORALIS SB in children by significantly reducing the gingivitis index (an indicator of oral health), when compared to placebo but also to chlorhexidine. Jindal et al., 2017, Deshmukh et al., 2017 and Sharma et al., 2019 also demonstrated beneficial effects of ORALIS SB on both plaque score and gingivitis index (indicators of oral health) in adults and children.

PROBIOKID® (L. helveticus Rosell®-52, B. infantis Rosell®-33, B. bifidum Rosell®-71, Fructo-oligosaccharides (FOS)) – already known for its beneficial effect on the body’s natural defenses – has been tested as an adjunct therapy in one clinical study on babies with thrush (oral candidiasis), showing beneficial effect in the clearance of infant thrush.

Lallemand Health Solutions’ research team has also performed in vitro and in vivo screening on LHS’ strains in order to select the best strain adapted for the maintenance of healthy gums, teeth, mouth or breath.

Specific strains have been chosen for their ability to produce inhibitory substances like H2O2, an antimicrobial metabolite which microorganisms such as Streptococcus mutans or bacteria producing volatile sulfur compound (responsible for halitosis) are sensitive to.

This strain characterization program also covers the competition of probiotics against other microorganisms, e.g. the in vitro S. mutans growth competition test (Agar spot test method). All strains recommended for the healthy teeth positioning have been shown to compete with S. mutans in vitro or in vivo.

The strain selection also comprises strains which demonstrated their ability to compete in vitro or in vivo with C. albicans, the microorganism responsible of oral candidiasis.

Strains which were demonstrated to have immunomodulation properties were also selected for their potential in reducing inflammation in gum tissues in case of gingivitis. 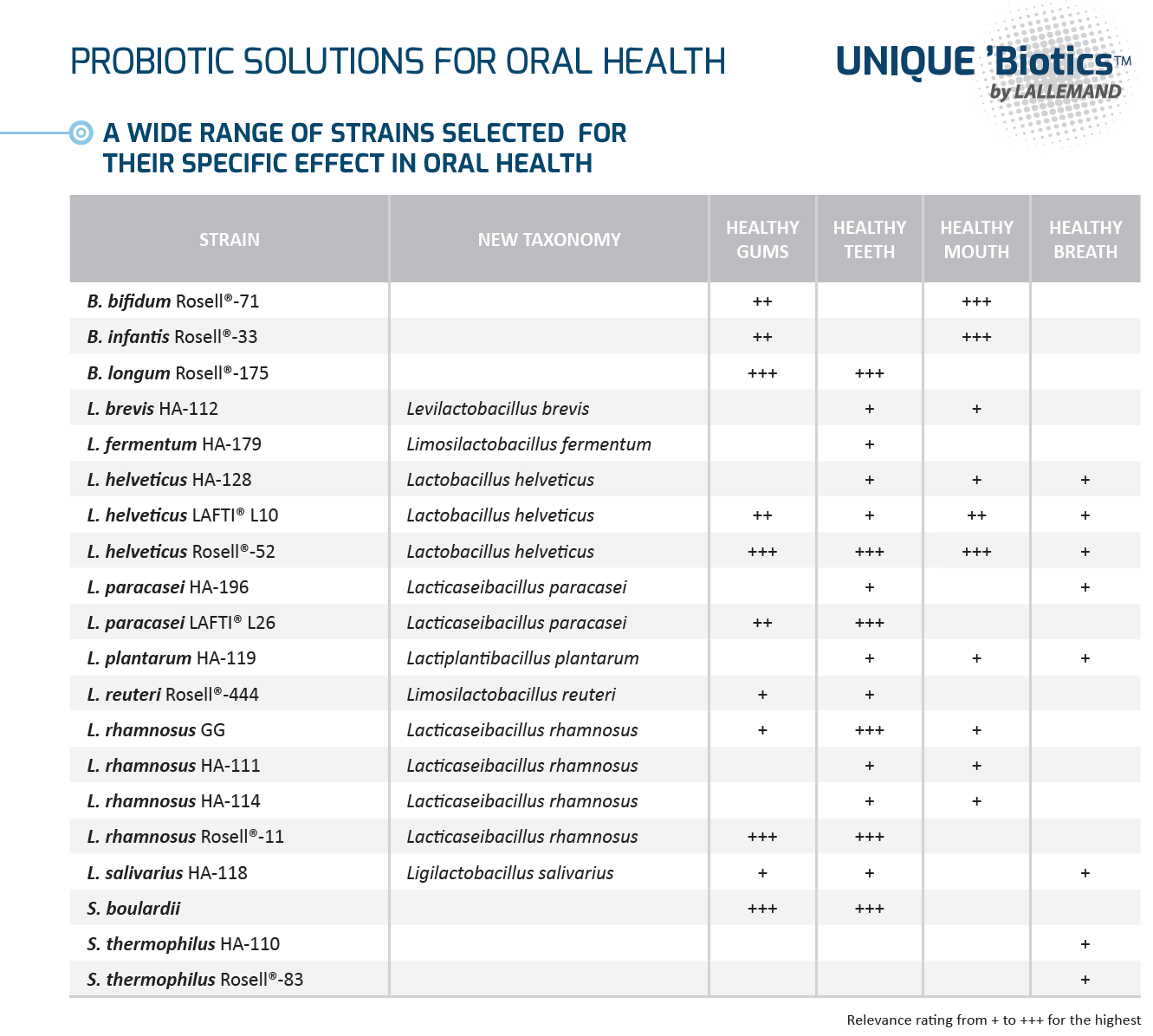