Natural Defenses encompass both our immunity and the defense of our gut. Today, the interactions between probiotics and immunity are increasingly well understood. Thanks to a strong research program dedicated to immunity, including innovative in vitro, in vivo and clinical studies, scientists at Lallemand Health Solutions are now able to draw a better picture of the pathways involved and the clear benefits of selected probiotic strains.

On this basis, we have been able to design a portfolio of probiotic strains to support Natural Defenses for different target groups: Babies, Kids & Teens, Adults or Seniors. 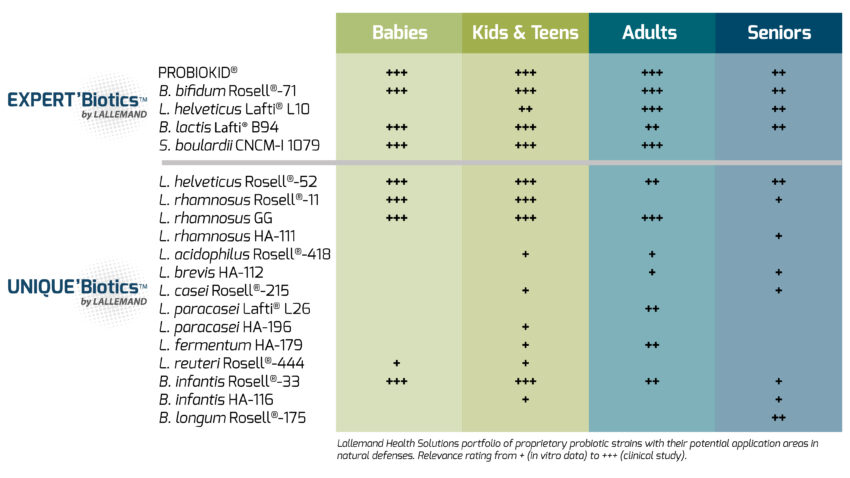 Defenses and tolerance: two sides of the same coin

The immune system’s main function is to protect our body through the recognition and clearance of opportunistic microorganisms (viruses, bacteria), or events. The corollary is the recognition of self and environmental antigens (food, airborne substances…) as non-harmful: this is immune-tolerance.

In an ideal world, the immune system performs these two roles perfectly: this is homeostasis. But, when the immune response is overwhelmed, or the immune tolerance is poor, body reactions can occur.

The immune system matures and evolves through life: specific defenses or tolerance issues can arise at each stage of life. 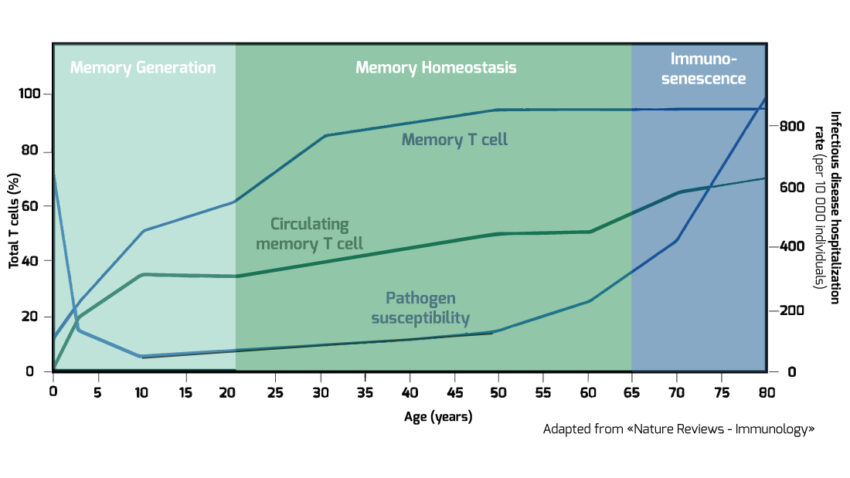 Probiotics and immunity: a close relationship

The relationship between the immune system and the gut microbiota is scientifically backed-up. It appears that the digestive microflora plays a key role in the development and maintenance of immune defenses. The microflora is particularly involved in the regulation of the immunity balance and the modulation of cytokines production.

In the same way as the immune system, the digestive microbiota evolves through life and its balance is impacted by stress factors. In this context, the use of probiotics, able to balance and interact with the host microbiota, has appeared as a potential strategy to positively influence the immune response. Over the past 15-20, years research has shown the effects of probiotics at different levels:

The role of probiotics in preserving and restoring the gut microbiota is well documented.

By enhancing the natural gut microbiota, probiotics can help keep opportunistic microorganisms at bay through several actions, such as competitive exclusion. For example, Lactobacillus helveticus Rosell®-52 binds to the attachment sites of Escherichia Coli on intestinal epithelial cells, avoiding opportunistic microorganisms installation and translocation. Many studies in children with LACIDOFIL® and also with Bifidobacterium lactis LAFTI® B94 indicate benefits in the reduction of occasional diarrhea of various origins.

Cazzola et al. published a study involving 135 healthy, school-age children who had at least 3 episodes of cold-like symptoms during the previous winter. A 3-month supplementation with PROBIOKID®, a children specific synbiotic formula (Bifidobacterium bifidum Rosell®-71, Bifidobacterium infantis Rosell®-33, Lactobacillus helveticus Rosell®-52 and FOS), was able to decrease the risk of occurrence of cold-like symptoms in these children by 25% vs placebo and to limit school absenteeism. Other studies confirm the synbiotic’s effects on children’s immunity, in particular through a positive effect on immunosurveillance, like increased IgA expression in children with low IgA level. Another study suggests that this positive effect could be due to the improvement of immune maturity.

Moreover, based on several safety and tolerance studies and a track record of safety, this synbiotic formula has been recognized for its safety in children by the North American authorities. In the US, a panel of independent experts in the field of probiotics confirmed the GRAS (Generally Recognized As Safe) status of the probiotics for infants and children while Health Canada approved the formula for children from 3 months old. In a study including 132, three and a half month-old to six month-old healthy, formula-fed babies, Probiokid® was able to maintain SIgA levels, as opposed to placebo group, supporting and maintaining a normal intestinal immunity (Xiao, 2019).

As far as they are concerned, teenagers, young adults and adults’ lifestyle and occasional stress can also be linked to sub-optimal immunity. Researchers sometimes use academically stressed students as a model of psychological stress which is associated with an increased incidence of cold and flu-like episodes. A large probiotic study conducted in 581 stressed students at the University of Florida during final exams for the autumn semester showed that the students who received B. bifidum Rosell®-71 had a higher proportion of healthy days as compared to a placebo group. Researchers saw a reduction in the percentage of participants and fewer episodes of cold/flu-like symptoms when compared with the placebo. In another study conducted in 300  healthy students suffering from frequent colds, a ten-week supplementation with Lactobacillus helveticus LAFTI® L10 reduced the frequency of the systemic cold-like symptoms and their severity, as well as the use of medication vs a placebo.

For other use than food / dietary supplement depending on local regulations.

The elderly are more susceptible to infectious diseases such as influenza, which can deteriorate into more serious conditions such as pneumonia. This is partly due to immunosenescence: there is a strong body of evidence showing that aging is accompanied by severe alterations in the immune system. Among these changes are alterations in T-cell subpopulation size, cytokine secretion pattern, cell replicative capacity, and antibody production. This can result in a poorer response to vaccines and an impaired control of latent viruses.

Another consequence is the profound modification within the cytokine network leading to the development of a low-grade inflammatory status, known as “inflammaging”. This chronic inflammatory status has been linked to a continuous antigenic load and stress. It appears to be the price paid to immunological memory.

The digestive microflora is also affected by aging. In particular, its diversity is reduced. Levels of Bifidobacteria decline and species breakdown is altered. On the other hand, the proportion of Clostridia, Lactobacilli, Streptococci and Enterobacteria increase. It has been advocated that modulating the gut microbiota by increasing Bifidobacteria level is a good strategy in the elderly. Several studies have shown a positive impact of certain Bifidobacteria supplementation on gut microflora balance (increased fecal Bifidobacteria).

Clinical trials in stressed adults and children also indicate that specific strains are able to induce immune-protection in at-risk populations. As seen above, the fact that L. helveticus LAFTI® L10 is able to help restore an immune response in athletes also indicates a good potential in seniors with a lowered immune response. Moreover, the combination of Lactobacillus helveticus Rosell-52 and Bifidobacterium Rosell-175 has shown potential in a clinical trial to reduce the physiological and psychological stress-like symptoms, with positive effects at the brain level shown in vivo. Such results indicate promising benefits in inflammaging, linked to chronic stress.