Probiotic Yeast: How Does It Work? 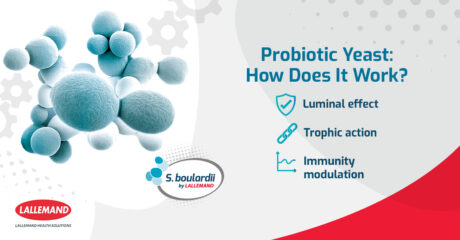 Saccharomyces boulardii  is one of the most popular probiotic yeast on the market today. The popularity of S. boulardii is attributable to its proven effectiveness especially for people seeking digestive support, but this is not the only reason. Since it has been studied for decades, its mechanistic modes of action have been documented abundantly. To learn how it works, continue reading! If you are interested to learn the story of S. boulardii you can read our previous article What health benefits hide in yeast?

Luminal effect describes the role of the yeast in the lumen, or the space within the intestine, as opposed to the wall of the intestine. The probiotic yeast can control the growth of other microbes in the gut or limit their attachment to intestinal cells through a specific binding to the yeast. The cell wall of S. boulardii acts as a decoy and attracts other opportunistic microorganisms on its surface and remove them as it passes out of the body through the stools. [Czerucka 2019]. S. boulardii also show secretory action by releasing specific proteins that inactivate the metabolites of opportunistic bacteria. [McFarland 2010].

Additionally, the yeast supports a healthy microflora by protecting intestinal mucosa metabolism and ecosystem. S. boulardii helps the body to absorb nutrients and enhances the release of specific enzymes [Pais 2020]. It increases the level of short chain fatty acids (SCFAs) supporting the normal colonic fermentation and absorption, as these SCFAs are the primary source of energy for enterocytes. Finally, it also provides an antioxidant activity by improving iron chelation [Gaisawat 2019].

S. boulardii has a strong multifactorial impact on the immune response by stimulating and modulating immunity. This probiotic yeast enhances immunological functions and increases specific immune parameters such as immunoglobulin levels [Qamar 2001]. Finally, in vitro and in vivo studies demonstrated its involvement in the modulation of the immune signaling pathways by acting to provide a proper balance of immunity. [Kelesidis 2012, Pais 2020].

How to best leverage the benefits of this time-tested yeast?

S. boulardii probiotic yeast is available as the only active ingredient: a capsule only made with 100% of the probiotic yeast without added excipients. This exclusive solution allows consumers to take advantage of its outstanding health benefits. Several other various forms and formula are also available, and the unique probiotic yeast can be appreciated by consumers in a soluble sachet or orodispersible stick suitable for everyone, from babies and children to adults and seniors.

S. boulardii is also used in combination with bacterial strains and powerful ingredients to produce synergistic effects. Indeed, two types of microorganisms have been successfully used as probiotic for decades: bacteria, mainly from the Lactobacilli and Bifidobacteria species; and yeast Saccharomyces cerevisiae var. boulardii. The two microorganism’s act in two different mechanisms and therefore put forth complementary modes of action, which bring a dual action and additional benefits. The combination of yeast and bacteria strains in a single probiotic product requires a specific know-how in yeast and bacteria production, to manage the viability and stability of both microorganisms.

Kelesidis 2012. Efficacy and safety of the probiotic Saccharomyces boulardii for the prevention and therapy of gastrointestinal disorders. Therapeutic Advances in Gastroenterology, 5(2) 111-125

Pais 2020. Saccharomyces boulardii: What Makes It Tick as Successful Probiotic? Journal of Fungi, 6(2), 78.